THAT pie chart on writing DM – what can be done?

When I created the pictured meme and posted it on LinkedIn, I had no idea how popular it would turn out to be.

I just thought it would be a shared frustration between myself and a few fellow fundraisers. Now, with over 10,000 views and several hundred reactions, the response far surpassed any other LinkedIn article or post I’ve ever done. Obviously, it struck a chord. 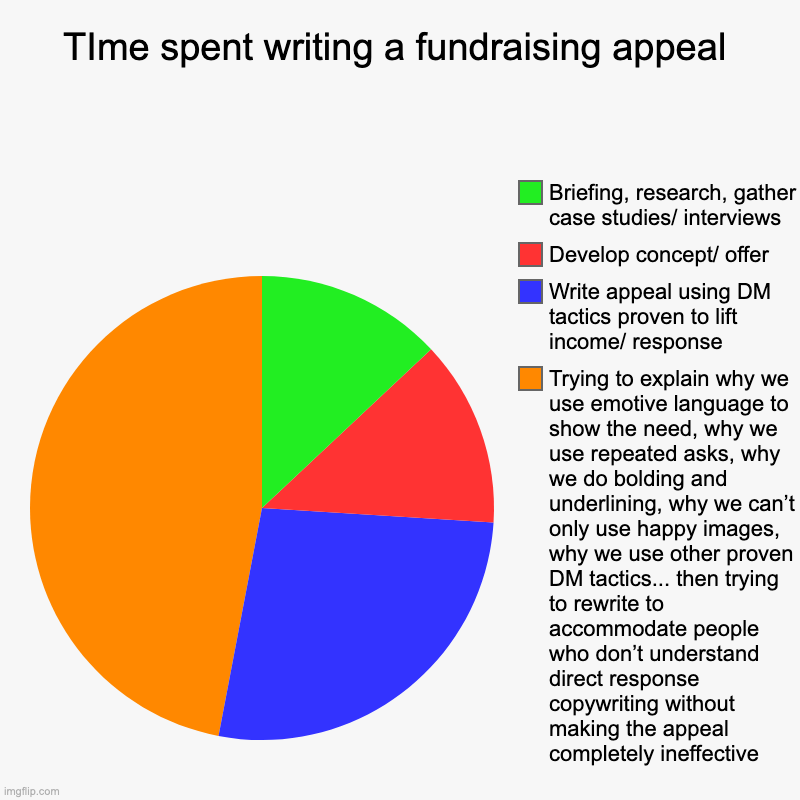 So what prompted me to make this meme? It came after working on several end-of-financial-year appeals for Australian charities. A few were new clients this year and almost all of them reported difficulties with some or all of the following:

This is nothing new. Every fundraiser has horror stories. Some of my worst ones:

Throughout my years as a fundraiser and developing appeals, these kinds of problems come up over and over again. Fundraisers fighting for the chance to just do their jobs. I know I’m not alone. I seem to be regularly commiserating with a fundraiser or client over the watering down of appeals. It’s not only bad fundraising but is demoralising and insulting to fundraisers who have put in time, effort and training to learn their profession. It’s also a huge waste:

So what can be done about this?

On the ground in the short-term, here are some practical things that can help:

In the long-term, both sector and organisational change is required to effectively deal with these problems. The suggestions I made above are really only tinkering around the edges of the issues involved. Here are some thoughts on how we can move forward:

Fundraisers asking more questions in job interviews – the marketing manager who interviews you for a new job may say they want fundraising growth, that they’re open to new ideas, that they’re willing to be challenged… but are they really?

Fundraisers need to probe more deeply. If they want growth, are key people like the CEO and Board willing to get out there and meet with donors? How many people will have to approve fundraising appeals and communications and what sorts of changes are usually required? What do they think about increasing appeal frequency? Ask to see samples of their appeals then provide samples of your work and ask what issues they foresee with that kind of fundraising. If there are brand guidelines, do they allow you to do best practice fundraising? When you’re in the job interview, ask the questions you need to find out whether you’ll be allowed to do your job. If you get the sense that you can’t, keep looking for a job where you can!

Collaborative brand development – if you’re going to undergo rebranding in your charity, then get your fundraisers involved and get their feedback. I’ve seen many a brand guideline document that a charity has spent time and money on to develop. So many of these brand guidelines make it literally impossible to fundraise, especially if you work in individual giving.

Font and colour rules that will result in communications that older donors won’t be able to read. Stringent stipulations on logo usage and style which mean you won’t be able to send a donor anything that doesn’t feel corporate rather than personal, authentic or fresh. Language and image restrictions which mean you must be always positive and “hopeful”. So you won’t be able to show the need or even tell the story of the beneficiary as they told it. Your brand guidelines must allow your fundraisers to do their jobs.

Specific training for anyone who is involved in making decisions about fundraising communications – first, there needs to be understanding that marketing expertise does not equate to fundraising expertise. Not when it comes to the direct mail tactics that were the subject of the pie chart. When I write an appeal, I use not only what I’ve learned from direct response training but I draw on decades of direct response testing done by others in both the fundraising and commercial sector. Yet so many marketing and communications managers believe their preferences will perform better when there’s little or no evidence their approach will work. They draw on no fundraising body of knowledge and have little interest in properly testing their hypotheses.

Marketers and communications staff who work on fundraising appeals must have some training in direct response and the evidence base around it (as opposed to leaving it to your poor fundraiser to educate you). I’d go so far as to say it should be mandatory for you to complete some kind of certificate in fundraising direct mail before being allowed to work on charity appeals. After all, you wouldn’t let an unqualified heart surgeon do your triple bypass. Why would you let an unqualified direct mail practitioner, no matter their past experience in marketing or communications, work on your appeals? That would be like letting the anaesthetist who put you to sleep for heart surgery do the whole operation. It’s a different skill set.

Anyone who “hates” fundraising direct response tactics or who doesn’t properly understand them should not be in a position where they get to approve appeal copy or images. That doesn’t mean there’s no room for questioning or trying something different. But that should always be in the context of a well-defined test, preferably over multiple appeals, and over several years.

Specific training in fundraising aimed at CEOs/ senior staff – so many charity CEOs (and even a lot of charity marketers) I know of seem paralysed by the thought of fundraising. They have no idea of the different types of fundraising options available to them and how to evaluate which ones would best suit their needs. As a result, they’re hyperfocused on tactics instead of strategy. Should we hire a grant writer? What about a corporate partnership? Should we send out an appeal letter? What about a crowdfunding campaign?

There needs to be training available so charity leaders can learn the pros and cons of different types of fundraising, how they work, the resources required and what you need to do to support fundraising. In relation to direct mail specifically, you as a charity leader don’t need to be experts in this area. But you do need to realise that you are not the target market for those appeals. You are not the donor. The level of approval you’re allowed to have on direct mail appeals should be limited to fact-checking. Or if you insist on micromanaging or you believe you know how to fundraise better or you somehow think your donors are “different”, then just produce and run the appeals yourself. Please don’t put your fundraiser and/ or copywriter through the agony outlined in the pie chart.

If you’re interested in a facilitated workshop to work through some of these issues, please contact me via email at june@junesfundraisingletter.com.